This image, known as the Burney relief, may or may not be Lilith.

The painting entitled Lilith by Kenyan Cox is another 19th century depiction of the demon. Done in two panels, the top panel depicts a scene similar to the work of John Collier with the serpent wrapped around her, seemingly kissing a pale woman with presumably blonde hair. The second panel depicts the temptation of Adam and Eve as well as their expulsion from Eden, eerily similar to the painting done by Michelangelo on the ceiling of the Sistine Chapel. Here, Lilith and the snake are transformed into one, offering temptation.
Posted by Meg R at 11:56 PM 1 comment: 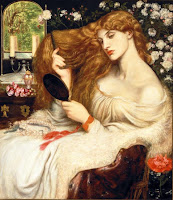 In addition to numerous poems about Lilith, D.G. Rossetti also produced two paintings entitled “Lady Lilith.” One piece is an oil painting, the other done in water colours. The painting depicts a pale woman in a floral setting, combing her blonde hair and staring at a mirror. There is almost an ethereal quality to her, and the floral surroundings are vaguely reminiscent of the Garden of Eden. In addition she is dressed in white, eluding a connotation of purity, which is a far cry from the depictions of Lilith that we’ve encountered so far. Compare to John Collier’s Lilith painting where she is nude with the snake wrapped around her.
Posted by Meg R at 3:27 PM No comments: 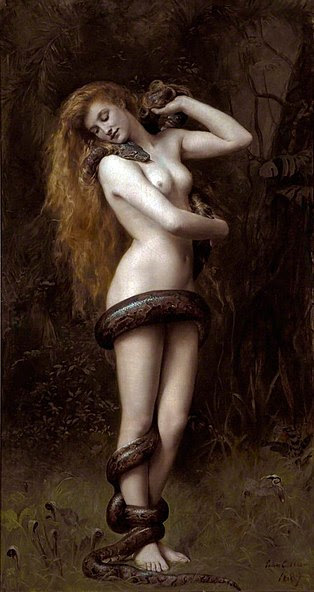 Art is another area that Lilith received prominence in, especially after the pre-Ralphite movement. The painting in question here is entitled Lilith and was done by John Collier. Like other paintings done of Lilith during the 19th century, namely the works of D.G. Rossetti, Lilith is portrayed as pale, blonde and beautiful. However, in this particular piece she is also nude, displaying her naked body with a snake tastefully wrapped around her body, covering her privates. The snake and the background suggests that this painting is set in the garden of Eden, but Lilith is the main focus. She is beautiful to be sure, but there is a sense of danger about her and she is a sensual and sexy woman. This a high contrast to D.G. Rossetti’s Lady Lilith painting where she is fully clothed and has am almost ethereal quality to her, sitting in her beauty and combing her hair.
Posted by Meg R at 1:18 AM 2 comments:

Browning is another poet to write on the subject of Lilith, but his portrayal is very different from the works of Rossetti. His poem, Adam, Lilith and Eve is almost a positive version of Lilith.

Adam, Lilith and Eve
One day, it thundered and lightened.
Two women, fairly frightened,
Sank to their knees, transformed, transfixed,
At the feet of the man who sat betwixt;
And "Mercy!" cried each--"if I tell the truth
Of a passage in my youth!"

Said This: "Do you mind the morning
I met your love with scorning?
As the worst of the venom left my lips,
I thought, 'If, despite this lie. he strips
The mask from my soul with a kiss--I crawl
His slave,--soul, body, and all!'"

Said That: "We stood to be married;
The priest, or some one, tarried;
'If Paradise-door prove locked?' smiled you.
I thought, as I nodded, smiling too,
'Did one, that's away, arrive--nor late
Nor soon should unlock Hell's gate!'"

It ceased to lighten and thunder.
Up started both in wonder,
Looked round and saw that the sky was clear,
Then laughed "Confess you believed us, Dear!"
"I saw through the joke!" the man replied
They re-seated themselves beside.

It is interpreted that the woman who says “Do you mind the morning/I met your love with scorning?” is Lilith. If that is the case, Lilith is more of a trickster character than a malevolent woman. Her demands, whatever they were (perhaps the author is assuming a familiarity with the Lilith legend), were not heartfelt, they were to test his love! (“His slave – soul, body and all!” However, the validity of this statement can be contested due to the ending of the poem, as their statements might have simply been teasing, and if that is true, then Lilith’s motives can be presumed to be in line with the older thoughts.

Unlike Rossetti, there is also more of a focus on Lilith emotionally rather than physically and desires, making her more three dimensional than before.
Posted by Meg R at 9:55 PM 2 comments:

Another poem that Rossetti wrote about Lilith was “Eden’s Bower.” The poem is quite lengthy and I will not repeat it here, but it is a more vivid description of Lilith than what is described in Body’s Beauty.

Again, in the opening lines, it is repeated that Lilith is Adam’s first wife. Immediately, Rossetti portrays her as a malevolent force again, saying “With her was hell and with Eve was heaven.” In addition, here, the snake of the garden appeals to Lilith to be his lover, cementing her as an evil woman. In addition to this, she is also portrayed as a more dominating figure, with Rossetti calling her “Queen of Adam.”

There is also a theme of revenge in this particular work that is not found elsewhere, with Lilith appealing to the serpent for revenge on Adam. She takes the snake’s form and proceeds to cause the fall of man. It is not uncommon for the snake in the garden to become associated with Lilith, but it is Christians who first made the connection between the serpent in Eden and the Devil, not the Jewish tradition that Lilith rose out of.
Posted by Meg R at 2:17 PM No comments:

Dante Gabriel Rossetti is a bit of a fan boy for Lilith, all things considered. Not only did he paint the painting “Lady Lilith,” he also wrote several poems explicitly about her. The first one, “Body’s Beauty” was made to go with his “Lady Lilith” painting.

Body’s Beauty – Dante Gabriel Rossetti
Of Adam's first wife, Lilith, it is
told
(The witch he loved before the gift of
Eve,)
That, ere the snake's, her sweet tongue could
deceive,
And her enchanted hair was the first gold.
And still she sits,
young while the earth is old,
And, subtly of herself
contemplative,
Draws men to watch the bright web she can
weave,
Till heart and beauty and life are in its hold.

The rose
and poppy are her flowers; for where
Is he not found, O Lilith,
whom shed scent
And soft-shed kisses and soft sleep shall
snare?
Lo! as that youth's eyes burned at thine, so
went
Thy spell through him, and left his straight neck
bent
And round his heart one strangling golden hair.

Mythologically speaking, the origin works well with what we have from Ben Sira and earlier sources. However, it is a short mention, found only in the first two lines. We are told that she was Adam’s wife, who came before Eve. However, beyond that, much of the poem is speculation, focusing on the sensuality of Lilith, the fact that she is beautiful, and that she is eternally youthful. It is also worth pointing out that despite highlighting all of these aspects of Lilith, she is portrayed primarily as a negative, evil force, seducing men. This puts the poem on the same level as the Talmud passages that describe her long hair and depict her as a malevolent force.
Posted by Meg R at 4:15 PM 1 comment:

Returning to the 19th century, today's focus rests on the novel Lilith by George MacDonald. I will confess it was a book that I did not enjoy much and would not read if not writing this thesis, but it is important.

The story of Lilith focuses on the story of the main character Mr. Vane travels through a mirror into another land. This land is mystical and medieval, ruled over by a princess who turns out to be Lilith. In this world also exist a spieces of children who never grow old and simply turn into giants, called the Little Ones. The key to allowing the Little Ones to grow old is literally in the hand of Lilith. In her hand, which is clenched tight, is water needed for the Little Ones to grow. In order to get her to release the water, which is impossible for her to do because the hand has grown fused shut, her hand is severed and she subsquently passes on.

Most of the book is focuses on the significane maintained by the character Mr. Raven, who turns out to be the Biblical Adam, and the house he maintains where the dead lie in endless sleep until the apocalypse. However, as per the purpose of this blog, the connections to the mythological Lilith are more important.

Although the novel is named after her, Lilith does not appear until half way through the text. Her name is first said on page 204 as Adam explains to Mr Vane why she is a villian in the text. According to him, "her first thought was power; she counted it slavery to be with me and bear children for Him" and that after had spilled her own blood, she was made queen of Hell by a force known as the Shadow (204). He also calls her the, "vilest of God's creatures." (205) The creation story of Lilith as explained in Ben Sira is used and played straight, although the escape to the dead sea is replaced with her becoming queen of Hell.

There is very little mythological connection from here on out. On page 282 Lilith is described as talking in a primitive language the narrator doesn't understand, implying her old age and on page 297 she can be heard talking about God and expressing sadness that she failed Him. However, both are very much minimally related to the mythology.
Posted by Meg R at 8:49 PM No comments: